Our great Florida friend brought us a toy we didn’t know we needed. It is an object that rides the line between a steam “toy”, a “farm machine”, a “tool”, and a “kids toy”.  We will pardon you if you have absolutely no idea what a “flame licker” or “vacuum engine” is so we will dig in. 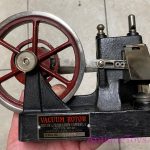 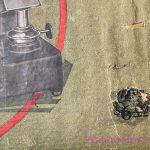 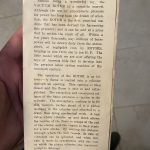 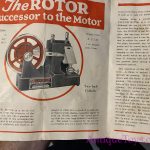 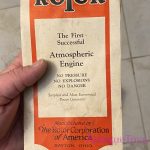 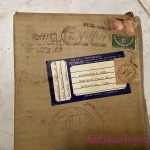 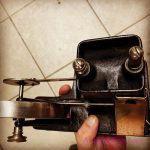 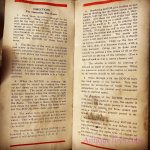 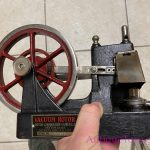 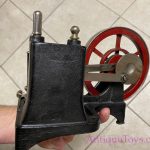 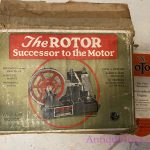 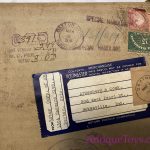 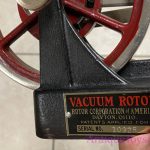 Bill Gallagher and Dr. Cummings’ book on The History of Dayton Ohio Toy Makers is a great place to begin. Page 237 describes the Rotor Corporation of American and their mail order toy from the 1920’s (ending at the beginning of the depression).  They suggest that the only toy product attributed to the company is our small engine that was sold via mail order; this one aka “The Rotor”.

If you are an American toy collector, you need this book in your library.  It covers Dayton Hill Climbers, Scheible toys, and numerous other smaller companies like the Rotor Corporation of America.

Our engine is fully operational and utilizes a flame to heat parts.  The vacuum propels the piston and rods to turn the flywheel.  From this flywheel kids or adults could do work, for instance driving miniature drills, saws, or windmills.  The flame is powered by alcohol and it burns under the protective nickel plated cover.

The entire toy engine is about 9 inches long and extremely heavy.  Rubber snubbers are underneath to keep sound and vibrations to a minimum.

The 1920’s ads brag that this is about a 1/50 HP motor!  Horsepower is small, but after  hand spinning the flywheel, we get a good amount of momentum.

Our example comes with a post dated box, address, and near mint toy.  instructions were even found inside and pictured for quick reference.

The Dayton Ohio toy book researchers believed that the company ceased operations in 1932, so production was rather limited for such an expensive object, retailing for about $6.   As I write this, we see postage occurred in 1934 and it has a proper corporate address.  So we have pushed the company’s end date out another two years. Our toy with Serial number 10325  likely book ended the production.

P.S. We have the “Large Engine” pictured.  There appear to be variations of this toy in three sizes:

Then we have a likely predecessor by the “Speedway Toy Manufacturing Company” of Ohio.  It was based at 218 Gibbons Arcade in Dayton, OH.  That or it could be hybrid of the two manufactures:

(these are based on an unmarked toy find and should be cross referenced).  The toy had a removable burner and filler basin in a rectangular shape:
Flywheel Dia.: 3.87″
Cylinder Dia.: 1.485″