This stunning 1937 Tootsietoy set deserves an article and a bit of praise.  It was recently seen on auction and normally is hidden deep within the best toy collections of the world.  It doesn’t often come to light, so we are happy to share photos.

Tootsietoys were in their heyday pre World War 2, and this set was produced around 1937. Factoid– “Tootsietoy” was registered as a trade mark in 1924.   The ships and figures shown here were made of the famous and heavy Tootsietoy diecast metal (a zinc alloy with likely some tin and possibly lead).  Paintwork is bright and precise as collectors have come to love.

We see images and designs of sci-fi and space exploration within the set.  HG Wells seeded the idea of space travel with his “The War of the Worlds” book at the turn of the century. The Wright Brothers set into motion lighter than air travel.  Buck Rogers was the pulp comic hero of the next frontier of space exploration. Toys soon followed the comics into space, and into kid’s imaginations. 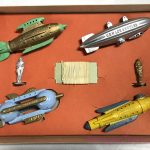 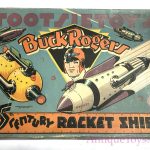 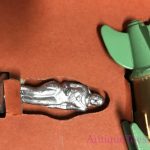 So with this prewar backdrop, the Golden Age comic character of Buck Rogers is cast into a gold figure.  His beau, Wilma Deering is in silver, and each of the figures are set near fabulous space toys and nestled within a beautiful box. We see the Flash Blast Attack Ship in light blue and gold, the Buck Rogers Battlecruiser in blue and yellow, U.S.N. Los Angeles zeppelin in silver, and Venus Duo-Destroyer with green and old.

We note that individually sold Buck Rogers Battlecruisers tend to be light blue and white (no. 1031).  We also note that the Buck Rogers Flash Blast Attack Ship sold on its own; it was often white with red highlights.  So this boxed set has ought after toy variations.

1980s and 90’s prices were out of this world, but we are seeing a few sets sell for fair prices and slip through the cracks.  Keep an eye out for these Tootsietoys  because they are a bit unassuming, however this is the only set we know of with figures of Buck and of Wilma!  We see hints of a Grammy sculpt here.

To us, it represents one of the best in Buck Rogers toys.  Then it all is about as heroic and “American” as you get…..

So please enjoy the photos and enjoy the history.

Buck Rogers is a fictional space opera character created by Philip Francis Nowlan in the novella Armageddon 2419 A.D., subsequently appearing in multiple media. In Armageddon 2419 A.D., published in the August 1928 issue of the pulp magazine Amazing Stories, the character’s given name was “Anthony”.[1] A sequel, The Airlords of Han, was published in the March 1929 issue.

Nowlan was contracted by the syndicate John F. Dille Company (later known as the National Newspaper Service syndicate) to adapt the story into a comic strip. After Nowlan and Dille enlisted editorial cartoonist Dick Calkins as the illustrator, Nowlan adapted the first episode from Armageddon 2419 A.D. and changed the hero’s name from “Anthony” to “Buck”. The strip made its first newspaper appearance on January 7, 1929.[1] Later adaptations included radio in 1932, a film serial, a television series (in which his first name was changed from “Anthony” to “William”), and other formats.