History has a way of fading important toy history, records, details, and milestones.  FAO Schwartz is the well known toy import store known from the movies Big and Home Alone 2.  Readers likely recall that FAO closed their New York store.  Then there was the Brother Gustav that ran the family chain in Philadelphia.  That history is murky for most.  There even was a Baltimore family store; that memory has almost escaped.  Records indicate a Bostonian toy peddling brother Richard.  We will to dig into the Schwartz’s history, family store details, and then shine a light on the almost forgotten G.A. Schwartz Philadelphia store. 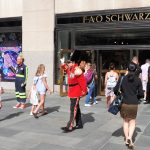 Schwartz patriarch, Henry, appears to have started in New York and then moved to Baltimore, MD after disliking the dense city lifestyle.  Henry and family were from the German province of Westphalia. He emigrated to the United States just before the Civil War and initially settled in New York.  Henry Schwarz partnered with a German named Schwerdtmann and created Toy Bazaar in Baltimore around 1862.  Then round 1872 the Elder Schwarz was off and on his own.

“The assortment is the most complete ever assembled in this city and imported especially for this market,” his Christmas 1873 advertising copy stated.
We would think that the father’s toy store was first.  Yet records indicate that son Gustav, G.A. Schwartz established his store in 1859! G.A. Schwartz was a PA toy store for the affluent.  It featured “Christmas Exhibitions and Toy Bazaars” at least until 1880 to entice parents to spend.  See the photo of an invite from a PA archive. 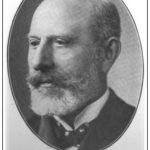 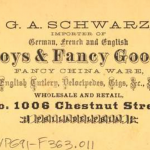 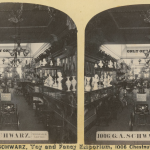 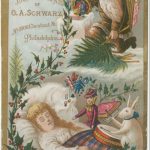 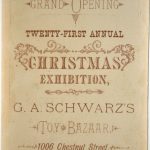 The Philadelphia store was famous enough to make the 1006 Chestnut Street the subject of 3-D style stereo scope cards.  The details inside, especially the large scale ride ons (French?) make you want to time travel. 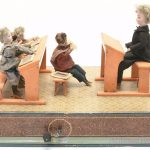 Another brother Richard Schwarz traded on Washington Street in Boston.

Sources state that the brothers sailed from Germany and joined him in the toy business. G.A. Schwarz opened a store in Philadelphia.

Going back to the Father’s store– According to a Baltimore Sun article, “Henry’s Baltimore Street shop became the most celebrated toy store in the city. The Schwarzes went on buying trips to the great toy markets in Germany. They brought back the specialties of the day: dollhouses, pushcarts, rocking horses and hand-carved Christmas garden villages. The goods arrived here at Locust Point via the North German Lloyd steamships each summer.”

“”These German toys were noted for their finished workmanship and the same thoroughness prevailed in the manner of packing. . . . No serviceable material was thrown away by Schwarz; the cord and string was wound in balls and used for mending dolls,” said a 1932 Sun article on the master toy seller.”

Henry Schwarz died Oct. 11, 1903. His son Gustave kept the business, however the shop was damaged in the 1904 Baltimore Fire and lasted until 1922. The F.A.O. Schwarz store in New York remained healthy.

According to the Sun “The name Schwarz did not disappear from Baltimore, though we did spell the name wrong. Schwartz Avenue and park, off the 6300 block of York Road (adjacent to the Pinehurst neighborhood) are named for Henry Schwarz’s summer place on Bellona Avenue near Gittings.”

We would love to see toys with F.A. Schwartz labels.  Send over any catalogs, and help us better understand the story behind this famous Silly store!

*Details, thanks to “Philly & Stuff Archives” was well as publishings from the PA online museum branches.

**Additional details were thanks to the Baltimore Sun and 2003 article by Kelly.