We spot fakes easily, but newcomers need coaching.  -Real or Repro? We will scratch the surface on how to tell fake cast iron, and better equip you for battle in the world of duplicity.

Our collector friends often need help identifying real cast iron toys and help spot fakes.  We will give some rules of thumb, and then note that in the end collectors should view and touch as many cast iron toys as possible.  Eventually you will develop a feel for iron toys. 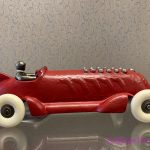 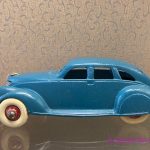 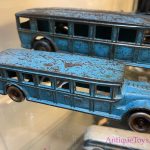 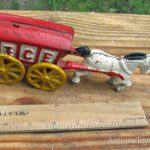 First, we note that “seams” tell a big story.  See if the part seams line up properly and are well executed with care.   Hasty reproductions often have gappy seams and sloppy grinder marks.  Cast iron toys were a labor of love in the day (Most production was from 1875-1941), and antique toys show tight fitting cast iron parts.

Review cast iron toy fasteners.  Rivets were used for most toys.  At times a straight slotted screw was used.  Seer clear of toys using Phillips head screws, as that invention gained traction later, around 1945.  American Screw company just started their licensing of Phillips screw production in 1936 for car production.   Cast iron toy production began to sunset at that time, and rivets were the entrenched cheap fastener. 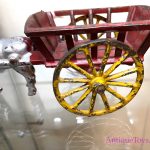 Look at the detail on your cast iron toy.  Lack of detail is a big tipoff.  Recast drivers, for instance, have less face detail on cast iron toys.  Cars and trucks remanufactured in Asia do not have the same detailing and sharp lines as the originals.  Wheels are an especially difficult area of detail, so look to wagon wheels and certain car spokes for signs of trouble.

Next, we use a magnet at times.  We find that drivers as well as bumpers get broken over the years.  Inexpensive fixes involve lead drivers and lead replacement pieces; the superior repairs will be of cast iron, and the original toys will be ferrous and magnets will stick. 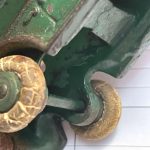 Review the cast iron toy paint.  Paint helps us quite a bit too along with aging tells.  How bright is the paint and do  you see signs of distress?  How is the feel of the paint, and to what level of chipping is there?  We have noted certain styles of chipping in restorations and then certain age related chips that are difficult to replicate.  Old cast iron toys just have a certain look when authentic. 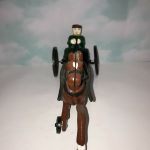 We spot fakes easily, but newcomers need coaching. Review the cast iron toy’s overall detail, paint, and seams.  Look into parts that may be fragile and don’t be afraid to carry a magnet. Look for aging.  You will develop a feel for iron toys.

In summary, note these tipoffs but be sure to view collections or as much authentic cast iron as possible.  Get an opportunity to hold the real toys and note typical aging.  Deal with reputable dealers and start with a few affordable pieces at the beginning.  Sometimes ugly and aged is a very safe bet; the wear and issues were hard earned from years of play.

Drop us a line at toys@antiquetoys.com if you have cast iron questions or toys to sell.  We greatly enjoy this metal art form and enjoy learning more every day.  Send your cast iron toy pictures in groups of 4 pictures or less per email. 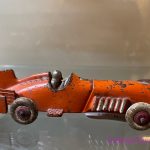