Yatta-What?  Yes, this will be a very foreign toy to many collectors in America and Europe.  See, this is the charm.  Have you ever seen another one of these?

The “King” version of Yatterman’s robot is the most deluxe toy in diecast from this 1970’s anime series.

We have a dog robot with cursory school bell.  Then we get an axe and shovel and ladder in chrome (of course).  The mouth opens up to reveal a tongue, but its a ladder.  The dog robot’s back is actually a missile launcher.

Our toy comes boxed with the oft-lost flags as well as missiles.  Condition is excellent, if not near new.

Size is just over 5″, and it is an extra dense diecast and extra detailed toy.

Yatterman (Japanese: ヤッターマン Translation: Yattaman) is a Japanese anime television series broadcast from January 1, 1977 to January 27, 1979, spanning 108 episodes. It is the second and longest show in the Time Bokan series, an anime series from Tatsunoko Productions.

Takatoku toys (1953-1984) produced toys well before the 1980’s, well before what they are now best known for- making the Takatoku VF-1 by Shoji Kawamori. Early plastic and tin toys had the humble “T.T.” stamped into panels. Later the company evolved into diecast robots, and then finally Takatoku Toys evolved into “real” type toys primairly of plastic. 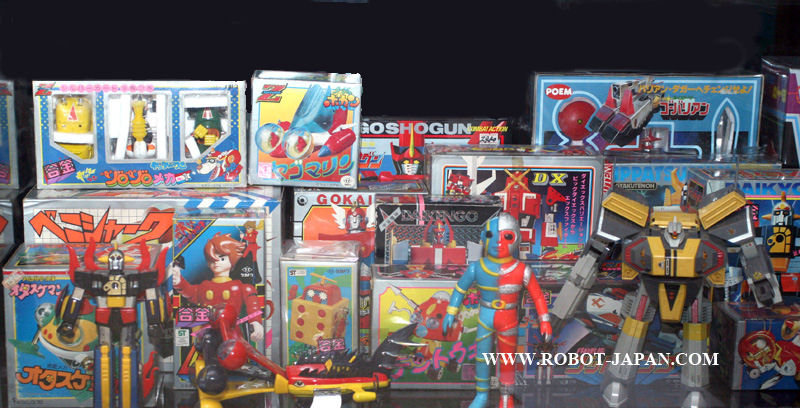 During the early 1970’s Takatoku marketed diecast toys under the Z-Gokin line. Characters included those for T.V. series such as Mach Go Go Go (Speed Racer in the U.S.), Time Bokan, Hurrican Polimer, Ultraman Leo, and Daikengo. Then Post 1970’s these Z-Gokin went away and toys tried to capture the up-coming toy model craze. Macross toys and Orguss toys attempted to make perfect models, and allowed kids to add stickers and customize. Unfortunately some of the T.V. shows weren’t as popular in the mid-80s and the company went away.

Note that Takatoku Toy designs were the basis for Transformers Whirl, Transformers Jetfire, and Transformers Roadbuster.  Jetfire is considered a masterpiece of 1980’s and early Transformers toys.  Each mode was well thought out; transformation was intuitive; and the toy could easily pose with leg, arm, head, and other joint movements.

Note too that the “Matchbox” SDF-1 toys that were brought to the United States came from Takatoku Toys.