Etch in your mind yet another lesser known pressed steel toy company– Republic Toys of Dayton Ohio.   Our “Tool Products Company” didn’t leave a long lasting impression toy collectors (at least from our standpoint), but should have.  Our American toy maker tends to be bunched into “Dayton” Toys steel products. 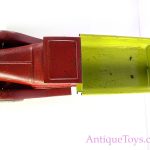 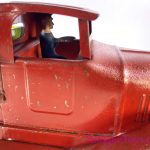 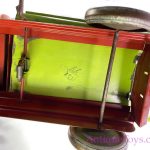 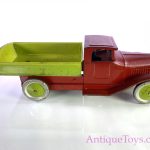 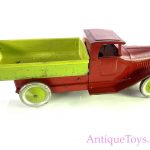 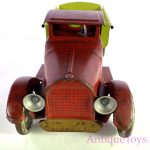 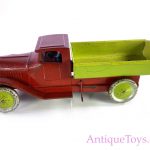 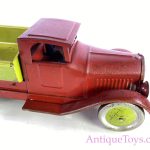 The Republic Tool Products Company was organized in July of 1920 and appears to have lasted to 1932.  One of the principal organizers, Elijah Miler, started with D.P. Clark so you will see some similarities to older Clark designs.  Foster Black of Dayton Friction Toys also contributed to the company’s founding designs.

Shown in this article is an extremely bright and flashy lime green painted truck with a red body.   It seems that this color was to attract kid attention, and that it did, however it was a late 30’s make and a swan song.

Disc wheels are a beautiful green too along with the working dump bed.  We, morbidly, wonder if there is some dried blood left in the bed; attesting to the sharp edges.

Inside the cab we have a nice hand painted driver.  Hood folds, bumps, and ridges are very well executed.  Something you would expect from a tool making company.  Headlights are a nice touch.

Length is about 18″ and the toy appears to be circa 1929, with another paint variation in orange shown in 1932.  We have noted a green body variation in catalogs, but it would have had rubber tires.

P.S. That is a 98 cent grease pencil mark under the bed!  That would be about $19 today, something fair for a large toy!