Toy styles mimic history and define generations.  Trains dominated the 1890’s, as railroads connected worldwide citizens.  Lighter than air travel enthralled the public and kids in the early 1900’s; toys copied life.  Cars defined the early 20th century.  War toys dominated minds in the 30’s and 40s; manufacturers marched to propaganda orders.  Space toys and The Space Race expanded kid’s minds in 1950s and 60’s.  In our article we will focus on Robots and Space toys of the magical 1950’s and 1960s. 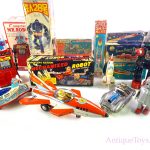 Believe it or not, some of the space toy groundwork was constructed in 1865! Jules Verne wrote the novel From the Earth to the Moon: A Direct Route in 97 Hours, 20 Minutes .  He touched on the subject of fired objects and moon travel, a precursor to rockets. 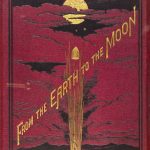 Here is a brief book preview– The story opens some time after the end of the American Civil War.  The Baltimore Gun Club, a society dedicated to the design of weapons of all kinds (especially cannons), is led by President Impey Barbicane.  He calls on the club to support his latest idea– that they could construct a cannon capable of shooting a projectile to the Moon. After receiving the support of his companions, another meeting is held to decide the place from which the projectile will be fired, the dimensions and materials of both the cannon and the projectile.  They ruminate on what kind of powder to use. 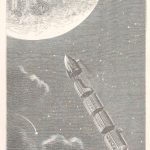 Stone’s Hill in Tampa Town, Florida is chosen as the site for the cannon’s construction. The Gun Club travels there and begins constructing the Columbiad cannon, which requires the excavation of a 900-foot-deep  circular hole.  A surprise awaits Barbicane: Michel Ardan, a French adventurer, plans to travel aboard the projectile, and we go down the path of space travel.

The origins of rockets and space station toys have deep roots in early comics too, and then the actual science of producing rockets in real life.  The war efforts of the 1940’s pushed space toys to the forefront.  Germany and the U.S. worked to get payloads (and bombs) away from land and into the cosmos. 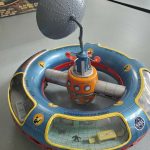 An exclamation point was put on the era with U.S. President Kennedy’s goal of putting a man on the moon.  The world of rocket and robot toys started evolving into space stations, moon landers, capsules, and fresh robot & rocket toys. -To the right we have quite a detailed space station toy, something out of the best sci-fi books.

The story of robots has been linked to a few independent evolutions.  We hear of robot being captured from Slovak regions of the world. The word “robot” was first used in reference to artificial people by the Czech author Karel Capek in 1921. It originated from the Czech word “robota”, meaning “work” or “labor”. 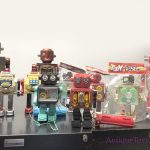 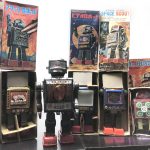 Historians note Japan’s fascination with super-war-winning robots around World War 2.  Iron Man Testujin 28 comes to mind here with his comic (aka manga, or Japanese novel) and toy greatness.  Japan’s Lilliput robot may have been pre-World War 2.

Going even further back, a Muslim engineer and inventor called Al-Jazari built what is believed to be the first programmable humanoid robots.  We even note these early mechanical robots (but not toys) from 1206.  They were musicians that played instruments while floating in a boat on a lake to entertain royal guests.

Now back to the Space toys and Robots, the toys themselves.  We are honored to share an encyclopedic collection of robots and space toys below.  Our vintage photos come from a collector that later streamlined his collection.  His photos from back ‘in the day’ are stunning.  We as mere mortals strive for such a well thought out collection. 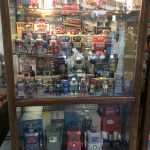 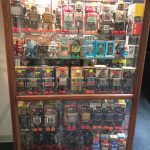 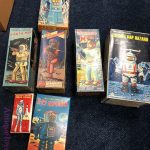 Our personal collection has some great items to share below; fantastic tin, ravaging robots, spectacular space baubles. For this expansive toy category,  these photos are the tip of the iceberg and our interest runs deep. 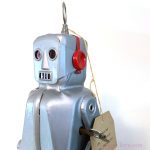 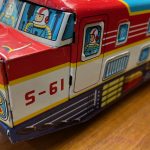 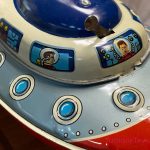 Space cars, space vehicles, and rockets deserve attention and more space (pardon the pun) on AntiqueToys.com.  We would like to buy excellent condition space toys and rockets for the site.  We would like to purchase robot toys to complement our collection also.  Help us find more Space Toys, Rockets, and Robots! 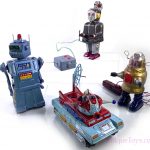 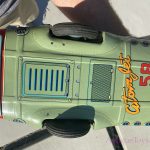 Please email us with photos and items to share! (toys@antiquetoys.com ).

One particular friend has an obsession with sharp robot boxes and great graphics; let us know if you have extra top notch toys!  Call 727 777-4206  with the scoop.

In the mean time, enjoy the space toy photos and have some space toy fun. 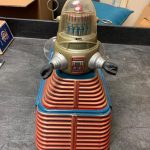 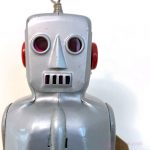