We have a new find in the world of Japanese toys, one that we didn’t expect– a Speed Racer Mach 5 Electric Kids car.  This distinctly 60’s design of GoGo Mach 5, aka Speed Racer car, crept into toy consciousness around 1972. Eidai toys produced a sultry die cast in the day.

Cartoon or Anime plot was simple and traced back much earlier.  The Elvis style “Speed Racer” won races to save the day from evil.  This animation was based on an even early set of Shonen Books (magazines) from around 1967.

Now fast forward into the early 2000’s, and we had a resurrection of the franchise.  One merchandising company under www.SpeedRacer.com chose to reach out in advance of a movie and release ephemera like shirts and jackets.  At the tail end of this venture, around the release of the 2008 movie, the company appears to have produced a kids race car for mass consumption.  -Appears to, but an official product release is unconfirmed. 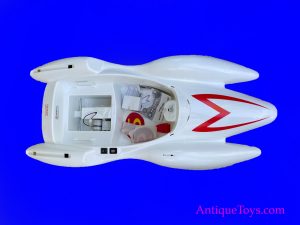 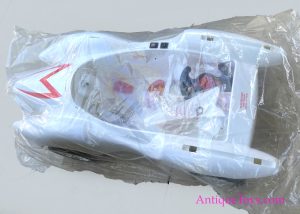 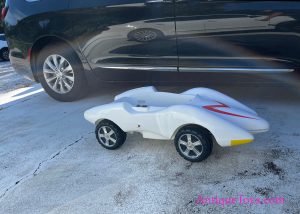 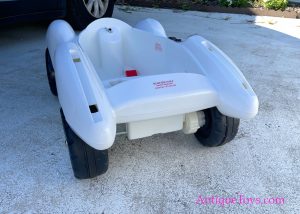 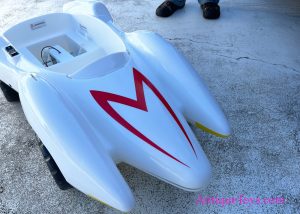 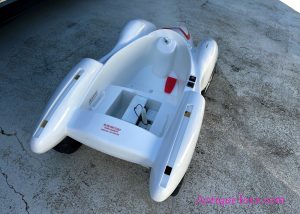 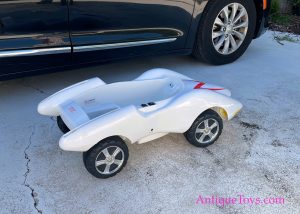 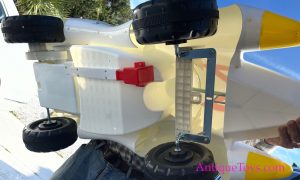 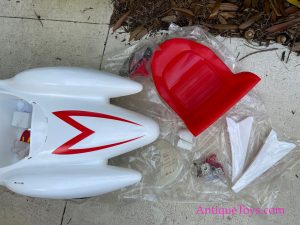 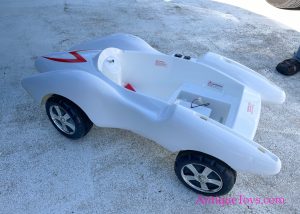 This brings us to the subject at hand– we were able to get a Speed Racer Mach 5 battery car that was unused.  It has a prominent quality control sticker on the steering area noting, we believe, year 8 or August.

In parallel, we dove into the internet archive for this merchandiser and didn’t find the product advertised for sale.  We viewed snapshots from Summer through Christmas ’08 as well as shots from 2009.  The aforementioned race car didn’t get offered on their site. 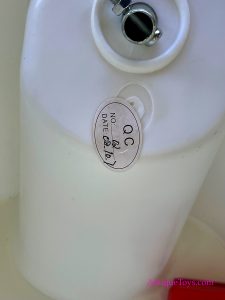 So one can then review sales archives, catalogs, auction records, other auction history.  -Again, no hit, and no similar product was shown as produced or even sold on the resale market.  Friends at our Japanese history site ToyBoxDX have not heard of this racer either.

We have been stumped.

The latest thoughts are that we have a test run, or feasibility release.  It has a prominent quality control sticker.  Details look to be ready for a mass production that may have been scrapped.  The movie did poorly.  The related anime remastering floundered.

Then another thought was it was a merchandising piece.  It was meant for store displays or even prizes with ephemera purchases and proof of purchases.

So please help us out on the further research.  Do you have one, or do you recall these Mach 5’s in stores?  Possibly you were the region that received the releases, where most collectors were left out.

Drop us a line and help on the digging– Toys@AntiqueToys.com

**Update, it appears that this toy was destined for Ross Stores distribution center….. now for someone to report that it actually hit the shelves. 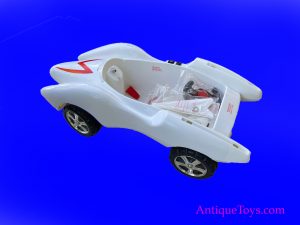