Friends and I have an ongoing discussion on tin toys and metal toys.  What makes a tin toy?  Why are some metal toys pressed steel and yet others known as tin toys?  Aren’t they all the same and is there cross over in the toy terms? 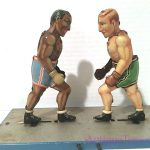 My latest line of thinking is this– Tin toys are more malleable (bendable) than the stronger “steel” toys.  Tin toys, in theory, have atomic element 50 of SN or tin inside the metal.  But you won’t have a microscope handy at toy shows, so here’s the scoop– I tend to judge the toys on size and metal thinness.

Also, many of the tin toys (at least post 1915) have colorful chromolithography.  They were machine printed in striking colors and patterns and then pressed into shape.  This said, the early tin toys were hand painted.

Very small tin toys become obvious since steel won’t bend well for fine details.  You get a “maximum bend radius” based on thickness or gauge.  SO…… small toys can easily be ID’ed as tin when thin metal is used.  Penny toys are a slam dunk as tin toys, as you will see with their finely bent micro details. 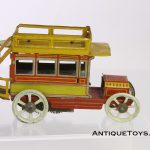 Japanese pre and postwar toys also seem to be a slam dunk on identification– they use thin metal that is easy to bend.  In fact, they literally recycled tin cans to make early 20th century toys.  Japan didn’t enter the heavy gauge pressed steel market too much. 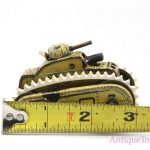 German toys, again, tended to use their locally supplied tin sheets to make tin toys.  German toys also use the minute bend radius and made numerous smaller toys that would fit in your single hand.  Even the bigger German tin ships would often be made of sheets of tin that were hand soldered. 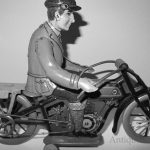 Now in America we were all over the place.  BIG Buddy L trucks are pressed steel.  They are massive and durable.  The steel is a hard sturdy surface for abusive play wear. 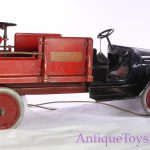 Wyandotte toy trucks and cars do often fit in the hand.  But when you look at the overarching methods of Wyandotte, we see thick durable steel used in a very thick gauge.  -Pressed steel toys. 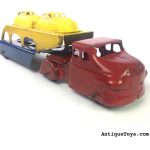 Marx toys were often, often, tin toys.  But you start to get blurry results in bigger scale toys of the 1920s and 30s.  I can think of how they bought out Hogue Toys and brought into their lineup Fire Chief cars and pressed steel windup sedans.  Those 14″ or so cars were steel.  However, the Marx BO Plenty, Disney toys, Character toys, etc in windups tended to be of tin.  -Thin, easy to bend, delicate, lithographed, and lighter gauge. 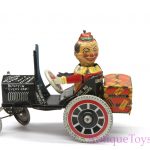 Then we get outright murky from the early days of the USA.  Toy makers constantly experimented.  We get early Arcade toy cars of cast iron, wood, and tin, strike that, steel.  The company used thin gauge steel in an early car or two that bent, was light, but was easy to rust steel.  I can think of early Wilkins beer trucks, fire apparatus, and windup motor coaches that also used steel.  These historic toys look as if they have tin, but the material is more durable.  These are not tin toys, they are thin steel toys. 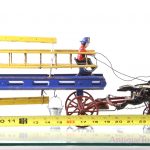 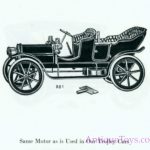 This converse car appears to have used steel.

Then we get into Girrard toys, Mohawk toys, Chein and it all gets murky without a scientist.  I’d lean toward most of the toys from the above companies being thin gauge tin toys.  However, I’ve seen quite a few that blur the lines.  America was experimenting.

Later in the 1950’s we had tons of metal stamping overcapacity so the likes of Tonka, Nylint, Buddy L, Doepke (in part), and Smittytoys (in trailer parts) tended to all be the extra heavy gauge steel.  The steel had to be pressed into bends and that utilized heavy hydraulic presses.

So, I’ll try to boil it back down.  Tin toys are often very malleable and made of softer metal like tin cans or soft German sheets of tin.  They tend to be thicker.  Tin toys also tend to be candidates for light windup and character toys.

Pressed steel toy had to be professionally tooled with tons of pressure and tended to be tougher.  Early American used some thinner steel, but you will find it a bit thicker than the normal tin. 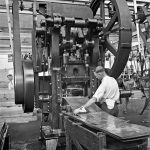 Cool the brain, ruminate, and have a great day!  Enjoy collecting your tin toys with a bit more background.  We will pardon the foray into steel….